I’ve just been through the process of contributing to the source code of a package in R (in a very small way) so here’s a short piece on how easy it was, and why anyone can do it! I originally wrote this post in August last year, but waited to post it until the new version of maptools was released. I missed this (we are now at 0.8-39!) and have only just rediscovered this post. It’s all still relevant though!

I have been using the Maptools library extensively in my use of R as a GIS, as well as in my teaching material (hosted at https://github.com/nickbearman/intro-r-spatial-analysis). The default plot order in the legend is to have the darkest colour at the bottom of the legend, and the lightest colour at the top. This was just something I accepted, and to be honest, never really thought about before.

I recently delivered a training course on R to some staff at the ONS (Office for National Statistics, England & Wales) and they said that their best practice guidelines are to have the darkest colour at the top of the legend. They asked me how to do this, which I didn’t know!

After some fiddling about with an R script, I created a version which worked for them. I then thought it might be useful to integrate this into the Maptools library, and emailed the package author, Roger Bivand. He was very helpful, and I added the additional code to the sourcefiles for Maptools. These are now avaliable in version 0.8-37 (or later), which has recently be released. Running update.packages(“maptools”) should get you the new version.

To reverse the colours is a simple matter of changing the legend code in two places. Using the example from the helpfile, the original line:

To give you some nice visual examples: 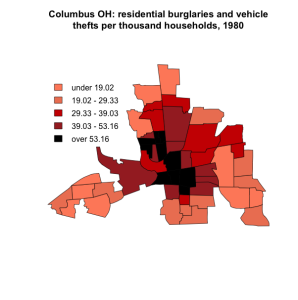 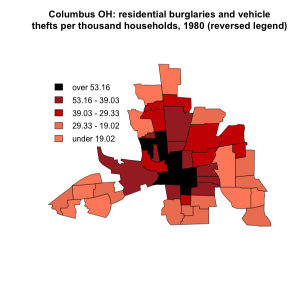 Or for those of you who have attended my R course: 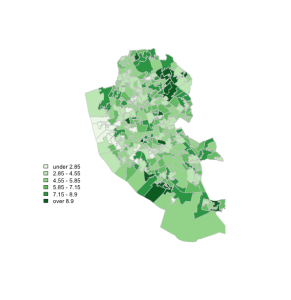 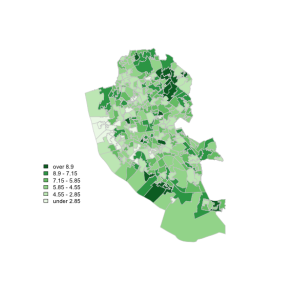 The file I updated is at https://r-forge.r-project.org/scm/viewvc.php/pkg/R/colslegs.R?view=markup&root=maptools (this link shows the changes), and I also updated the helpfile. If you’ve done some R scripting, then it is not too difficult to do. Any questions, please post them here. Good luck!